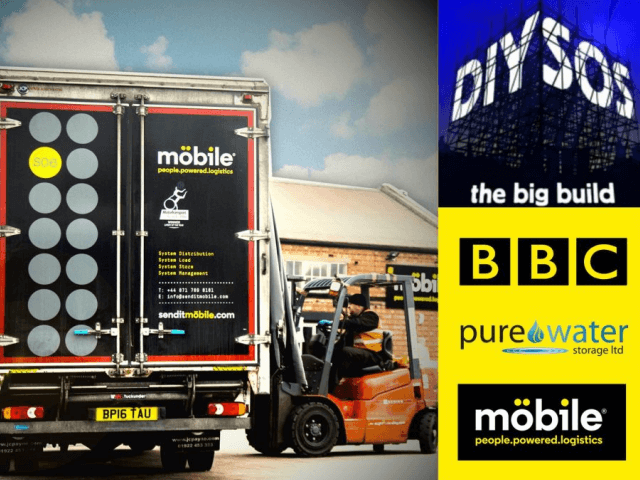 BBC TV show DIY SOS approached Mobile to see if we would offer support in delivering one of its biggest-ever projects, rebuilding vital community facilities that had been affected by the disastrous fire at Grenfell Tower.

Mobile People Powered Logistics arranged six shipments of building materials over two weeks to the site at Grenfell, in West London, to help with the construction of a community centre and boxing club.

We delivered a range of fit-out construction materials, everything from electrical cables to a full bathroom suite to the site. Driver Jay Parker even got the chance to meet DIY SOS star Billy Byrne (pictured).

The results will be revealed when the two-part programme is broadcast later this year.

The build took place in the week when the public enquiry into the fire, which claimed the lives of 72 people, opened in London. It was the single biggest loss of civilian life on UK shores since the end of the Second World War.

“The project initially started with our client Purewater Storage, who got involved and asked us to take one of their water storage products to the site. After that, the BBC got in touch direct and asked us to coordinate some additional deliveries and we ended up taking six shipments down to Grenfell.

We took all kinds of things, from electrical cables to water tanks, a full bathroom and various construction materials.

“We run a truck to London every morning and evening and as we’re a 24-hour business, we were able to do the drops in the middle of the night as well. This helped ease some of the bottlenecks they had in the daytime as the only had two weeks to get the project done. We were delighted to be able to do our bit.”